Just over six months ago I was in Spain, extremely excited to be embarking on my journey to become an NLP Trainer (Neuro-Linguistic Programming). Since joining Network Marketing in 2014, I discovered an industry who’s foundation is the forgotten LAW OF COMPENSATION. I was 22 years old when I first heard about this profession, but I paid no attention to it. I believed it was all about SELLING and I wasn’t interested in the idea of selling. While some others would say, it’s a numbers game. There was much criticism of the industry and the Network Marketers. I experienced vast amounts of judgment from people as soon as I even mentioned Network Marketing. However, deep in my gut, I saw the opposite when it was presented to me again in 2014. I saw an authentic opportunity for ordinary people to discover just how amazing they are if they can be genuinely committed to delivering value to their customers. It was a profession that screamed AUTHENTIC to my beliefs and values, and I had to learn quickly that highly influential and successful people did not see things through the same lens as I did. These were the caliber of people I wanted to work.

2014 oozed with success; I had completed my Masters in Digital Media, completed my NLP Masters Practitioner, A Diploma in Interior Design. I was having an incredible time, enjoying successes I could have only dreamt possible. I decided to set up my own company with my daughter and discover a life of entrepreneurship. We seemed to be networking with some highly knowledgeable individuals, and things were happening for us effortlessly. We recognized a need for young people to know about NLP. I had completed the practitioner and the masters from the standpoint of a curious student and had no thought of pursuing the knowledge to Trainer level and above. However, this did not stop me from practicing my skills. After having success with school management teams to create a vision based on values, I started to actively see the need to learn the material from the view of a trainer so I could expose young people to the same high-quality coaching. It would set them up for life and transform their lives as it had done for my children and me. I could see the benefits of this training as a need for people in the Network Marketing Profession as well. If the highly influential people in my network were not interested, then I had to BECOME THE QUALITY OF PERSON I was looking for to work with myself.

As the months came closer to leave for Spain and embark on becoming a trainer, both my son and I were nervous. We hadn’t knowingly been using the knowledge, or if we had, we were not aware we had or how. We were cowboys, sharing our experience with anyone who would let us. We had much success and fun in the process. Our first targets were family members; it was much fun using language and rapport building techniques in ways we had not been aware of before. It had undoubtedly transformed our lives and those around us. However, teaching the knowledge was about wearing a different pair of shoes, it was about seeing things detached from your self. We were embarking on a journey where what we shared had to come from a place of confidence, but confidence, only really comes after doing the thing that scares you.

In preparation we read books from the list provided, memorizing the cards and took the refresher examination papers. Despite doing everything asked to prepare for the training. I know I still felt nervous about my standard because NLP in my mind was about ‘DOING,’ and it was the doing that was going to create the belief in the content, and help make the delivery organic and not mechanical. I hadn’t done enough DOING. I thought about my training to become a teacher, and I knew how much consistent effort I had put into that training. I put my faith in the process and holding onto the knowledge ‘I had done everything that I could have before embarking on the journey of a trainer,’ I was ready as I could be. Even invested in acting lessons before embarking on the training to give me the best chance of delivering a high standard. I put my faith in the outstanding lessons I had taught for over thirteen years as a teacher to high school students with success grades rising year on year. I believed in myself.

Very soon into the first week, I felt the emotions of DISAPPOINTMENT, CONFUSION, FRUSTRATION, JUDGEMENT, LACK OF SELF BELIEF, ANGER, HELPLESSNESS, FEAR and the LACK OF FAIRNESS boiling up inside of me. A concoction of feelings I hadn’t felt since I could remember. The emotions were wearing me down; I was becoming increasingly exhausted. The training took all my energy just to get to the end but I was pleased I had kept going despite the situation I had put myself in. I was feeling like I had completed a marathon. I had to surrender to what was, even though I didn’t understand what it was. I didn’t label it, I just accepted it, and I knew I was holding on to COURAGE and OPTIMISM despite the storm that had unleashed itself within me. I was not going to allow myself to accept a certification, for something which was not to the standard I would want. So my journey continues…

Back home I have an opportunity to investigate my thoughts. What had I told myself during my training? I could apply a powerful tool of NLP designed by Robert Dilts called SLIGHT OF MOUTH to my belief and discovered my more in-depth thoughts and vibrations.

You may choose to apply these patterns to some of your ideas and find out what is happening on an unconscious level.

NLP – Slight of Mouth in Action 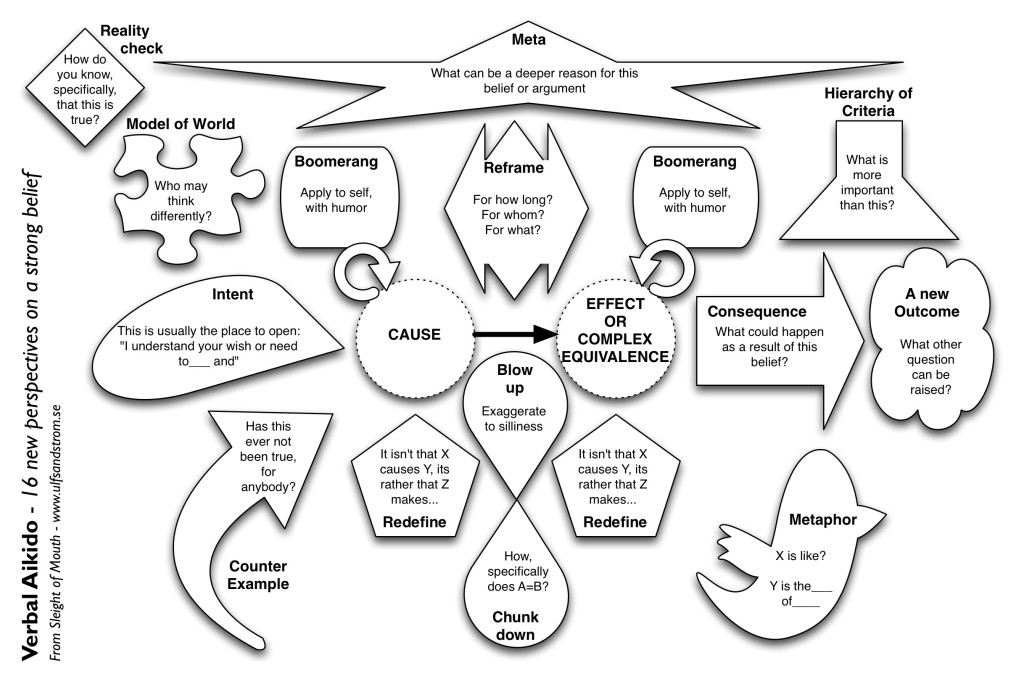 After spending some considerable time listing my thoughts from the three weeks in Spain. I decided to focus on just one belief to take through the 16 different processes for this blog. I thought this belief is one maybe some people could relate to in a vast range of situations.

Here is my example:

To use the SLIGHT OF MOUTH model above to take an idea though. It is important to note when you use this tool to challenge another person’s belief, your tone of voice, your posture, and body language will all be integral in how you communicate their idea back to them. Start in the middle with CAUSE and EFFECT…

“When I was born did I tell myself I’m not ready to walk yet?

“If I only do things when I’m ready, wouldn’t that be like waiting to walk when I’m old enough or when I feel ready?

“A belief like this tends to hold someone back from ever really discovering what they can do or where they can become better.”

“The real issue isn’t that I’m not ready but rather a fear of not being good enough. I could explore that!”

“Isn’t it more important that I moving towards my aspiration than waiting?”

Belief is like a magnet; Magnets attracts more of the same situations/circumstances so I know I must choose wisely what I would like to attract more of.

Did I really think that it was going to be a walk in the park – what did I expect – was I expecting to really know everything to know about NLP in just two weeks?

“I started to compare myself.  I was judging and comparing myself to others. I had stepped into victim mode and notising things that would validate how I was feeling.”

“It isn’t that I was not ready, it was more that I felt judged, tested, compared and measured. That style of teaching didnt deliver value in my opinion rather it became a competition. I was judging the delivery of the material and comparing it to past workshops and courses I had been on. I was attracting what I was thinking.

I understand that I wanted to be ready to deliver the content confidently and I now have the opportunity to grow my knowledge and practice because I know what my priorities really are.

Not every NLP student has the same belief. Many believe you can pick up the information quickly and fake it until you make it. They will do that what is expected and pass immediately.

I don’t and didn’t know this was true. I have had constant praise from those people who I have worked with, I suppose this was more about me setting very high standards for myself. Many times in the past people in senior positions have said I am too tough on myself.

A belief that -“I’m not good enough”

What did you discover still lying deep within you?

The beauty is, when you discover this unconcious vibration, it will start to disappate and eventually disappear as long as your constantly affirming yourself with the affirmations that empower you and your self belief.